I’ve been on a roll this week with five big updates in the last five days. Must be cold everywhere and folks are all staying inside and making some comics!

I wanted to take a minute and give an update on a short story that’s been in the works for… well… for a very long time.

Now, I’m not the superstitious type, but I was starting to think that my 3-page short, COMPROMISED, was cursed. Every time I would nail down an artist for the story, they’d commit to the script and do a little bit of art and then completely disappear off the face of the planet. I don’t know if they’d gotten hurt, lost interest, didn’t like the story, or fallen into a sarlacc pit, but I’d never hear from some of them again.

Lots of my comics pals have been through this same struggle but it was the first time it happened to me and I was finally able to commiserate with their frustration. This story is now on its sixth artist (can you believe that?) and it looks like we finally have a winner!

I’ve seen the first page drawn about five different times, but the artist who finally signed on (and followed through) is the wonderful Tomasz Witas, from Poland.

I’d put out a call, needing an artist for a quick turnaround and when I saw his samples I kept my fingers crossed that he’d like the script enough to take the challenge.

And take it he did! The first page of art took my breath away and I’m happy that he’s the one who will ultimately be giving this story life. Take a look at his website and enjoy his art style. He’s remarkably good at what he does and hopefully this can be the first of many collaborations.

This 3-page story will be published by GrayHaven Comics in their Spy Anthology due out in November of 2013.

It appears that the curse has been broken! 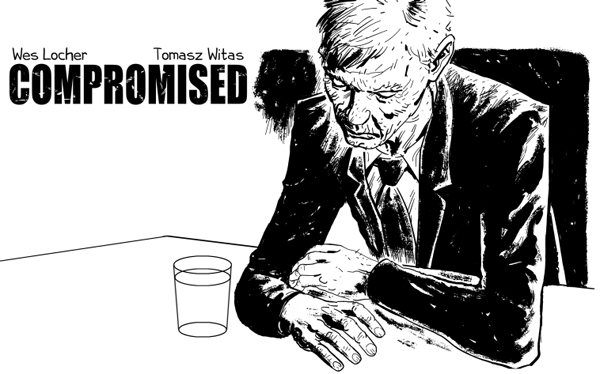