I’m excited to announce that I have a new sci-fi/humor series being released Wednesday, October 9 (tomorrow) called AWRY!

The talented Graeham Jarvis served as artist, colorist, and co-pilot for the series which we spent the past few years putting together.

So what’s this crazy book all about?

It took 10 years for the Phyllos to reach the black hole Formax-C, and in that time, the crew of four came to loathe one another. But when the mission suddenly goes awry, the astronauts must overcome their differences and work as a team if they hope to survive an unforgiving alien world and make it back home.

The series is being published exclusively in digital format by Action Lab Comics, through its “mature readers” imprint, Danger Zone. In an attempt to satiate the binge-readers out there, all 4 issues of the series will release on the same day ($2.99 each), and a week later we’ll drop the 90-page collected edition ($5.99).

Awry is available for preorder on ComiXology and Amazon to be read on your favorite digital devices. 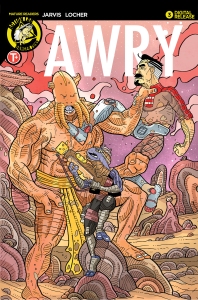 I hope you’ll check it out and support not only me, but a great publisher and a wonderful artist who is going to blow you away with these pages.

Thanks for checking it out!