Just a few days after receiving the completed 4-page script for my upcoming short comic, THE PICK, the ever-talented artist Kristian Rossi has fired over pencils for the first two pages of the story!

The Pick will be published by GrayHaven Comics in their Public Domain anthology, due out early 2014. I’m especially excited for this anthology since all of the stories star characters available in the public domain (shocker, right?). Get ready for some throwbacks!

Kristian and I also collaborated on comics Chambers and The Temporal. If you’re a fan of his work (as I am) you’re going to love this story as well!

I also heard that the Deadhorse team of Eric Grissom and Phil Sloan are contributing to the anthology. That alone will be worth the cover price! Speaking of Deadhorse, their first trade is now available. Pick it up — it’s good comics by good people.

Sneak peek of The Pick! 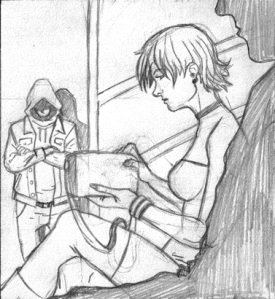